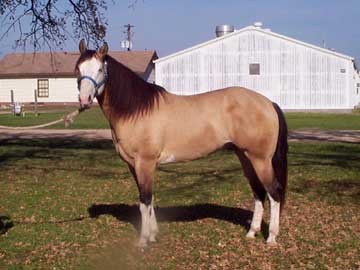 Buck is a 1993 buckskin overo stallion with two blue eyes, a very affectionate personality and a simply incredible presence and appearance. He is currently foundered in one front foot, but rehabilitated to almost 100% soundness. The laminitis all started for “Buck” when he was a 4-day-old foal who, among other barn foals, came down with an illness that caused him to have an extremely elevated fever for several days. Although none of the other foals survived that illness, “Buck” managed to pull through, unfortunately at the cost of his feet. Because of the high fever he sloughed all four hoof walls, basically, becoming laminitic from the onset of life.

Fortunately, because of the care he received and his young age, he managed to regrow his hoof walls and recover to a certain extent. Over the years “Buck” has had several owners, most of whom tried to offer him a chance at becoming sound and hopefully performing in the show ring. No one wanted to geld him due to his wonderful personality and conformation, hoping he would become an excellent breeding prospect. However, as time progressed, his lameness could not be resolved enough to maintain a soundness necessary for consistent performance.

In 1999 I became aware of his condition while participating in the rehabilitation of chronically foundered horses. I immediately fell in love with “Buck”. He was so patient to work with, gentle to be around and just overwhelming to look at. After some discussion, I managed to purchase him – having paid more for him than any sound horse I have! Over the last 2-3 years he has become increasingly more sound and produced some wonderful foals. Currently he is pasture sound, hopefully progressing to riding soundness, and spends his days more concerned about the closest mare and putting more beautiful foals on the ground than whether or not his feet hurt.

Since he has improved so much, he is now standing at stud with shipped semen available. For each mare bred, $100 of the fee is donated to The Hoof Project Foundation, in hopes of someday finding not only a cure for our laminitic friends, but also a prevention.