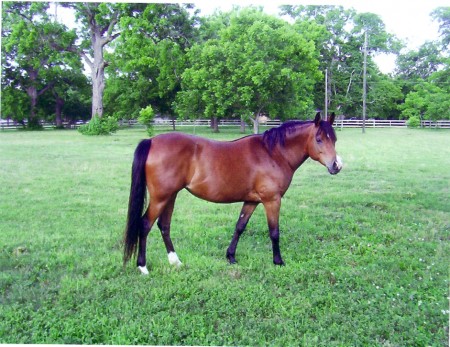 Cameo, now 21, is Contessa’s full sister. When she arrived at our home it was clear she had been foundered for some time but was stable currently. Therapy and shoeing restored her feet to the best possible condition, as we had hoped
she could be put in dressage training. That was not to be, however it was
unrelated to her founder but rather to the trainer’s discovery of an old shoulder injury preventing her complete freedom of movement on that side.

Cameo came back home to continue her retirement, which we gather had begun the day she was born. She resembles their dam while Contessa
resembles their sire, but both have classically beautiful Arabian heads with
large expressive eyes that say so much if one but stops to observe.